Sailing on the Hudson 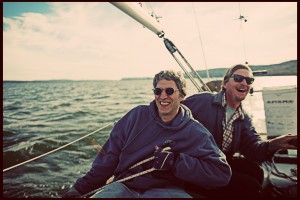 Odalisque is 1967 Tartan 27. Caleb Davison and Matthew Schlanger own her and race her (along with loyal crew) out of Nyack Boat Club located in the Tappan Zee on the Hudson River.

The Tappan Zee (or Tappan Sea) is a natural widening of the Hudson River, about 3 mi (5 km) across at its widest, in southeastern New York in the United States. It stretches about 10 mi (16 km) along the boundary between Rockland and Westchester counties, downstream from Croton Point to Irvington. It derives its name from the Tappan Native American sub-tribe of the Delaware/Lenni Lenape, and the Dutch word zee, meaning a sea or a wide expanse of water, but most commonly refering to a lake formed in a valley through which a river flows.

This blog/ site has been created to help communicate between our crew and offer a place to post thoughts and activities Odalisque.