After my overheating incident in the early summer of 2004 I felt a bit helpless since I hadn’t the first clue about how to proceed. To make matters worse there was a persistent drip coming from the stuffing box and I had to make frequent visits to the boat to run our bilge pump. I was beginning to think that owning a keel boat was more then I could handle. I remember bumping into a smiling John Klee Jr. on the HHC launch and he asked me about my boat. When I told him that the engine had overheated and the stuffing box was dripping he made it sound as if it would not take much at all to fix those items.

What I needed was help, even a gentle push in the right direction. The first push came from Noah and his brother Adam who came out to Glen Cove to inspect the engine and determine if it was seized or if it could be fixed. The first determination was easy: the engine was not seized since it turned over easily when started. The second determination was that there was no cooling water getting into the engine. I watched as Adam identified various engine components and fearlessly disconnected a hose or two to determine the lack of cooling water flow. I had just learned that our engine had a cooling water pump.

I forget how I came to find Moyer Marine, whether someone told me about them or if I had stumbled upon them by a web search, I had found an expert who knew the Atomic 4 engine, inside and out. I almost could not believe my luck as Don Moyer himself spoke to me on the phone a few times and it was decided that it would be a good idea to replace the old cooling pump with a brand new one. The overheating issue was nothing a few hundred dollars worth of engine parts couldn’t fix. The parts arrived a few days later and all I had to do was remove the old pump and install the new one. Nothing could be more simple.

Unfortunately though nothing is that simple when working on an engine installed in the Tartan 27′ sailboat. The access to the water pump on our boat was excruciatingly awkward and it was by no means easy to get the old bolts on the water pump to finally loosen enough to be extracted. There really were only two bolts and about two hours after I had started the old pump was off and the new one installed. I had cursed a lot, had grease under my fingernails, some cuts and bruises but the new water pump was installed and best of all I had installed it and it actually worked!

There is something extremely gratifying about attempting something new and unfamiliar and succeeding. During my nadir of despondence about the engine I had entertained paying a ‘professional’ to help right whatever was wrong. Fortunately I could not find anyone to hire so I was forced to try to fix it myself.

As a reward for my hard work no sooner had I tested out the newly installed water pump I was able to enjoy a great sail in our boat with my old sailing buddy Don Mullen. We sailed out into the LI Sound and around into Huntington Bay. The boat performed like a champ in the 10 – 15 knot southwest wind and we dropped the anchor just inside Lloyd Harbor and watched a sailboat race that was about to start well before sundown. It was a glorious day and reaffirmed for me why owning a 27′ sailboat was a worthwhile endeavor. 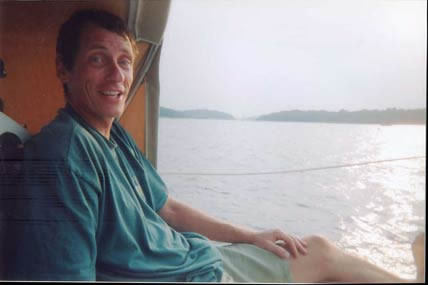 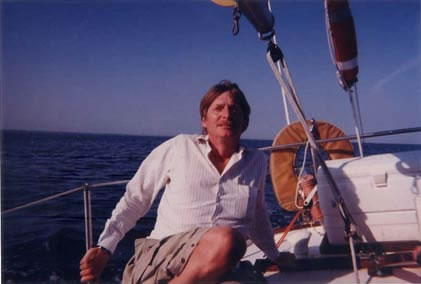 Odalisque used a transient mooring from the Huntington Yacht Club for about a week before heading back to the extreme western LI Sound. The stuffing box was still leaking a bit so a few visits were necessary to pump out the accumulated salt water.

For the short trip back around to Hempstead Harbor I recruited another old sailing buddy and high school friend. Rick G. helped me get our boat back to a mooring at the Hempstead Harbor Club. We had to motor most of the way because the wind was non existent but I remember him remarking how quiet the old “A4” engine was compared to diesels on many other sailboats.