Repairs on the hard in Glen Cove, LI, NY

I had spent some time in the boat yards around Sea Cliff in my teens as a friend of my parents, Ted Coller, had a 22 – 24′ power boat that he would invite my father and myself aboard for short fishing expeditions on. I also agreed to work on his boats bottom painting a few years in a row and got to know the gruff but salty characters that a boatyard might attract. I must have been about 14 when I first became aware of the Interlux boat paint brand, epoxy when I did my first ‘bottom job’ on our family friends double ‘V” hulled power boat.
I enjoyed spending time in the boatyard with our boat, working on it, jawing with other owners or yard workers who came by, admiring other boats and just generally being happy that I was not in an office with cubicles while the sun was shining, clouds drifting by, sea gulls calling and all kinds of boatyard dust and chemical vapors drifted by. Sometimes the electric sanders that would be going on at the same time sounded a bit like a ‘sanding symphony’ with a gyrating sound like a swarm of worker bees on a sunny day.
Here is a very bad picture of some of the damage we had to repair: 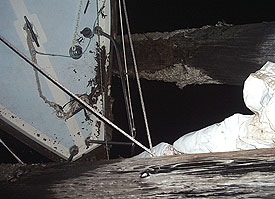 Back to the repair of ‘Odalsique’ in 2004..
I did my best at winterizing our engine in the fall. I even ran fresh water through it using a siphon feed and did not use hose pressure to cool the engine after finding the ‘T’ fitting that had been installed and explained to me by the nice PO. I even ran a gallon of anti-freeze through the engine. How was I to know that there was a thermostat bypass system for the cooling water so most of the anti-freeze went out the exhaust or that our water pump impeller needed to be drained if not removed? I didn’t know where the carburetor was much less the fuel pump or that the boat even had something called a ‘stuffing box’ and cutlass bearing.
I shot myself in the foot by not knowing enough basic combustion engine knowledge but experience is a thorough teacher. The next spring I tried to restart our engine on the hard. The engine ran but the gear shift was not really in neutral and at one point the boat vibrated badly. I am convinced that this was not good for our Cutlass bearing among other gear. Since I never drained the raw water cooling pump (and never checked the pumps impeller before leaving East Hampton) I am convinced that my poor winterizing job contributed to the failure of said water pump impeller that will soon occur.