Third season; up the river

We started our third season with ‘Odalisque’ on the LI Sound and happily there were no issues with the boat. The highlight for me of this season was the delivery trip we did with ‘Odalisque’ bringing her up to Nyack Boat Club from ‘the Sound’. A change of anchorage was planned and although an unknown to me, I agreed to the Tappan Zee area of the Hudson River. The boat would be quite close to where Matt and family had moved to.
A plan was made, while consulting the Eldridge Tide and Pilot manual about the East River currents and times, a day was picked and a crew showed up to take ‘Odalisque’ around Manhattan and up the Hudson River. The crew was myself (Caleb), Matt and my old friend Jean Marien from my school days.
On the LI Sound section of our relocation trip we sailed all the way from Hempstead Harbor. We entered the East River an hour or two late for the change of the current so we tacked and tacked again. In fact we sailed down to just before Roosevelt Island before we kicked in the motor and furled in the jib for the flume ride by Roosevelt Island. Our hand held GPS showed our speed over ground (SOG) at just under 10 knots as we flew by a congested F.D.R. Drive. 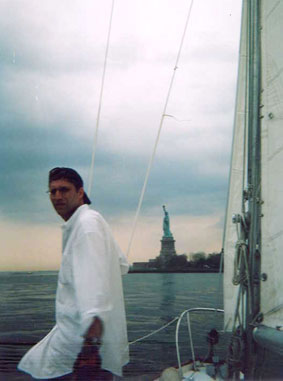 Rounding the bottom of Manhattan it is important to watch out for the Governor’s and Staten Island Ferries. We took a few tacks near Lady Liberty and the end of Manhattan and motored into Liberty Landing Marina for the night. 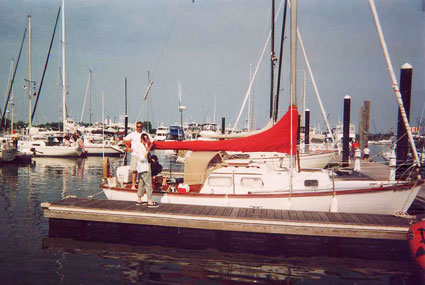 Jessica joined us the next morning for the 25 nautical miles to Nyack, up the river. Pretty soon we were under way. Once we reached the Palisades and were past the G. W. Bridge our SW wind was greatly reduced. A Canadian catamaran of at least 32′ came up from behind us flying only an asymmetrical spinnaker. The Canucks passed us. It was a long day in a lot of sun and heat but we got ‘Odalisque’ delivered to the Nyack Boat Club.
Pictured here are Jessie and Jean: 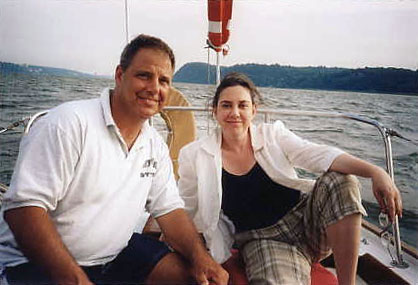