When we first bough our boat a good friend and fellow boat owner advised me against the 35 year old Tartan 27′ from 1967 we were considering because of it’s age. I listened to the advice and yet we bought the old boat anyway. I love her salty looks and design and she sails well to boot. It just has more systems that need repairing or maintaining; but all boats, no matter how old, have system’s that need maintenance or repairing. 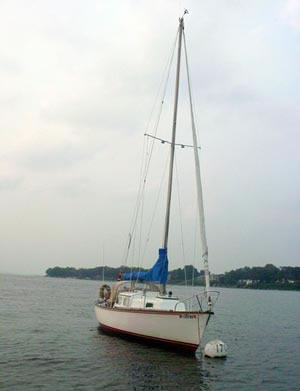 What my good friend was warning me about is the kind of maintenance chores you have to do with an older boat. After 10 years of ownership we finally decided it was time to replace our Cutless bearing due to the shaft vibrations we experienced while underway and it was deferred maintenance that could be deferred no longer.
This picture is before we did anything to the drive train. 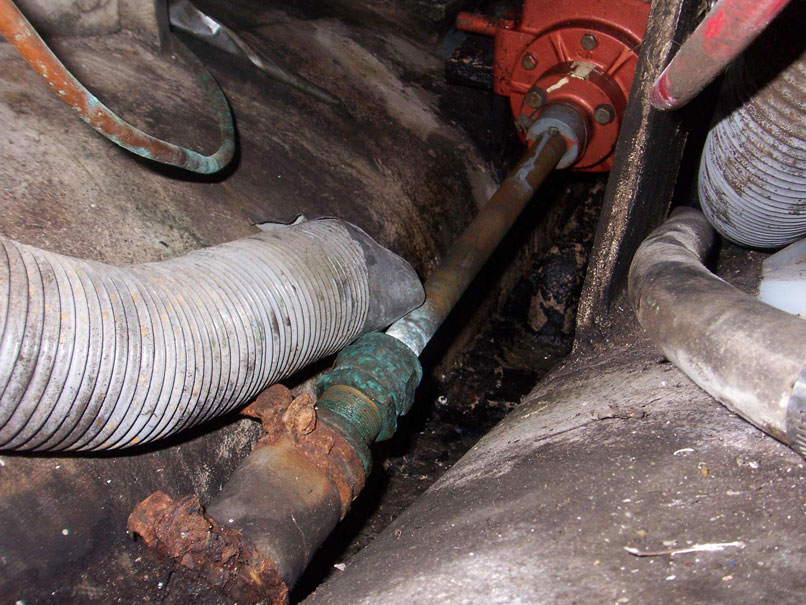 The picture below shows how one of the shaft log hose clamps turned to dust after poking at it with a screw driver. 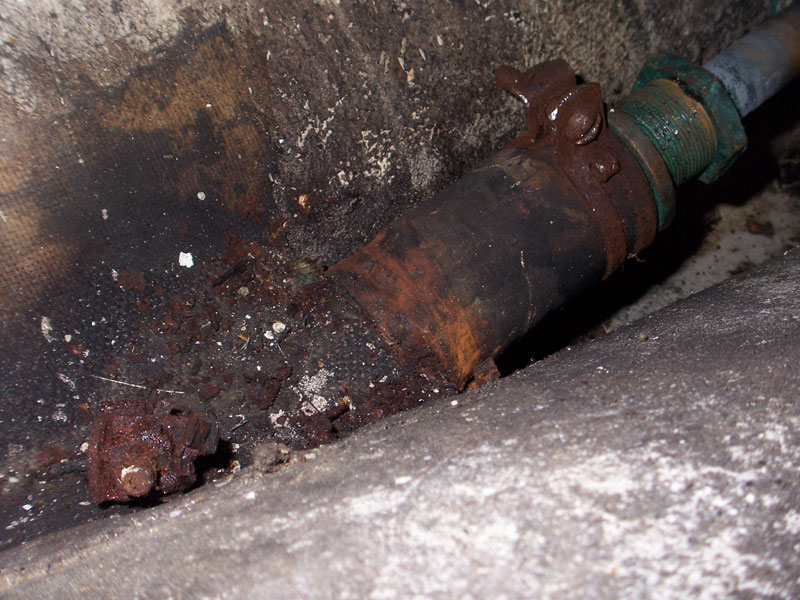 As it turns out, much of our drive train could very well be 43 years old, the same age as our boat. The source of the vibration we felt was likely due to the worn bronze shaft at the stuffing box. We decided to cut the shaft inside the engine compartment which was easier then separating the coupling given the space. 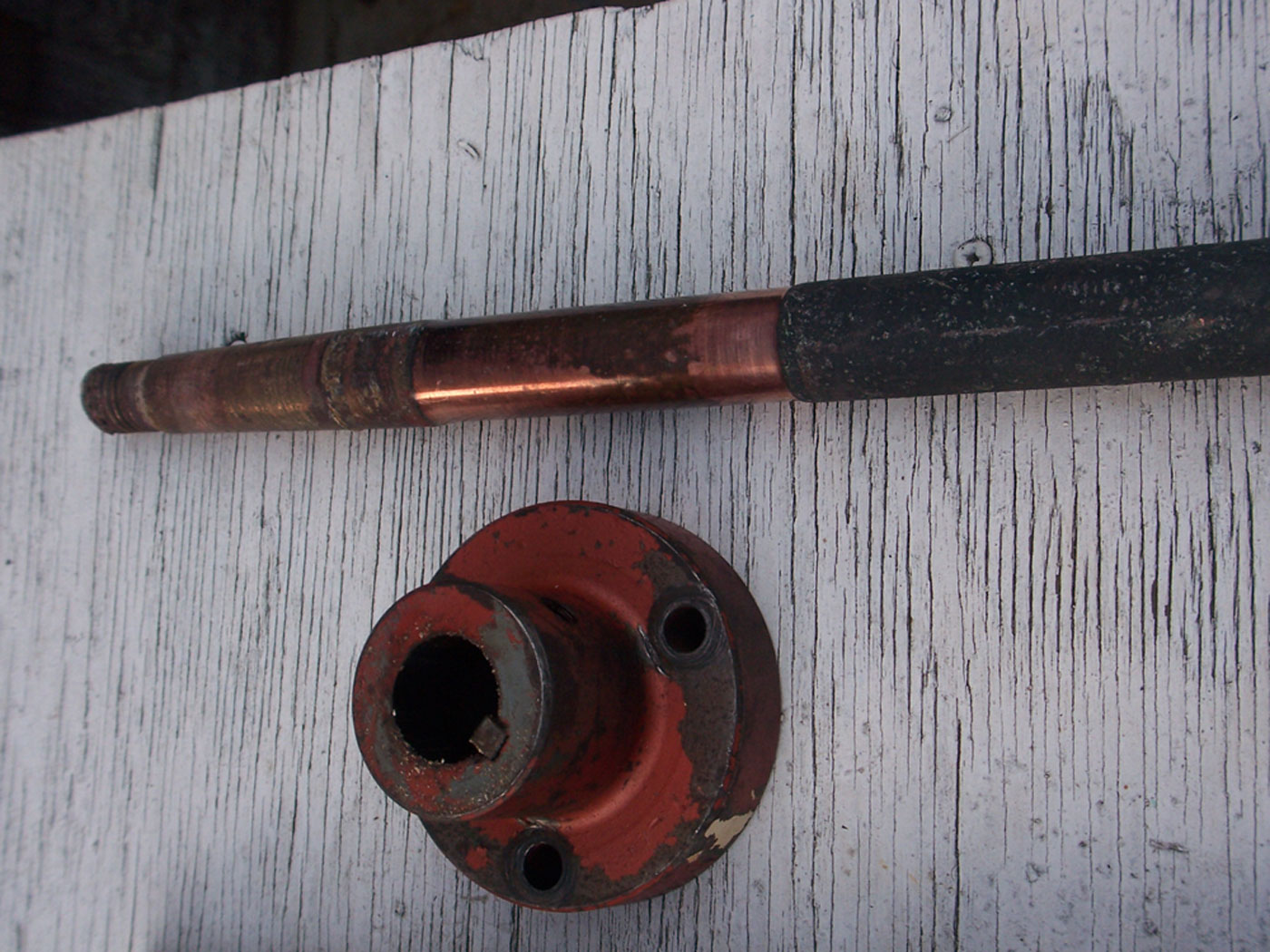 A borrowed Sawzall with a metal blade made light work of cutting our shaft into two pieces (thanks Bob). 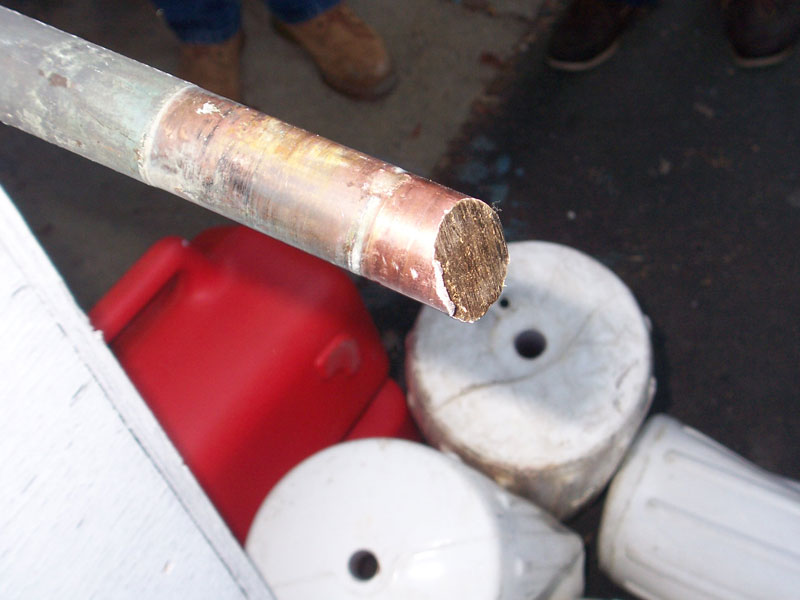 With the shaft in 2 pieces and removed from the boat it was fairly easy to remove both the flange and the prop from the remaining pieces of the shaft. We used an old automobile steering wheel puller kit I had to press off the flange from the shaft and the high tech kit our club had for pulling the prop. 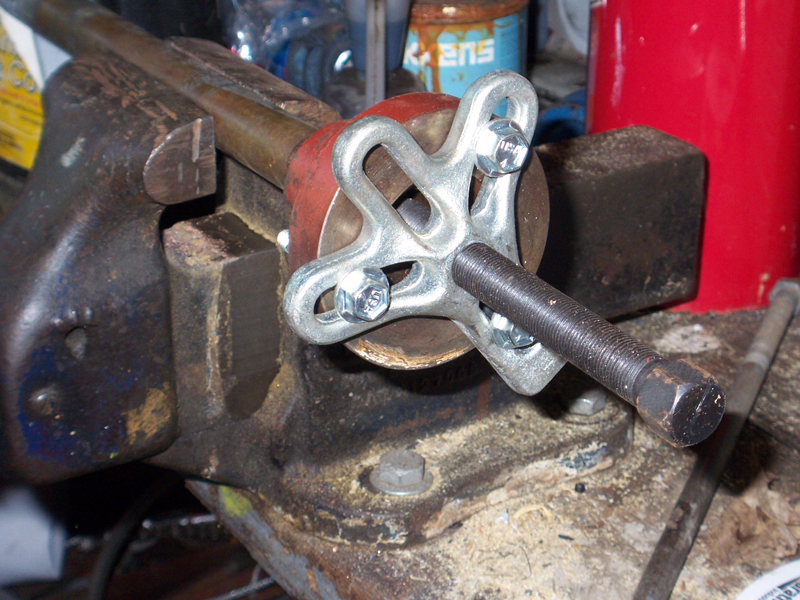 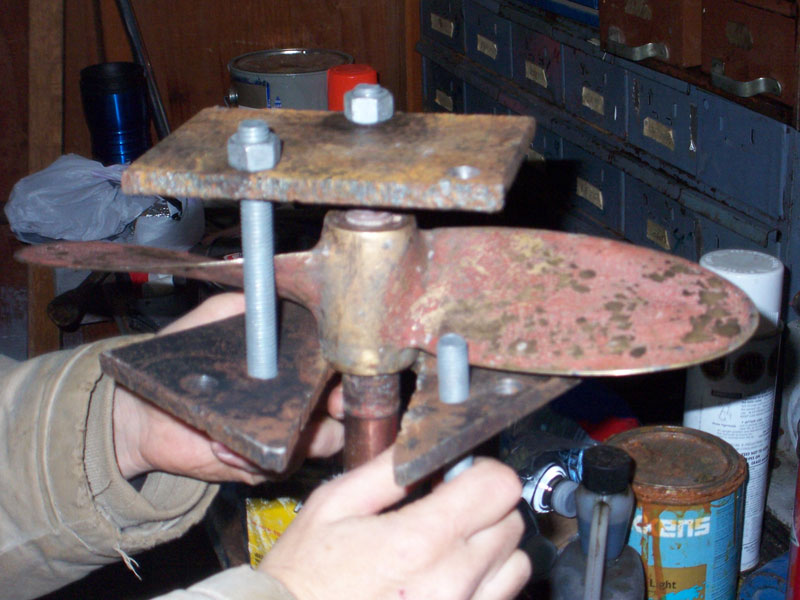 Sunday 12/11/11.
We spent another 4 hours or so working on the drive train today. We had tried pressing out the perhaps 43 year old Cutless bearing with no success so the next plan called for dragging out the Sawzall again to cut up the old bearing. This picture shows what a power tool can do to a Cutless bearing: 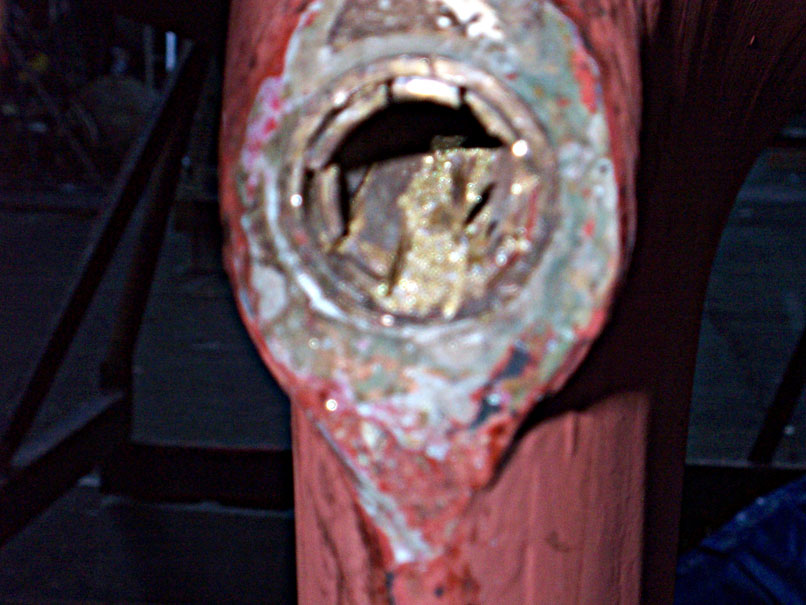 Once we were able to remove one strip of brass the Cutless bearing was easier to remove. 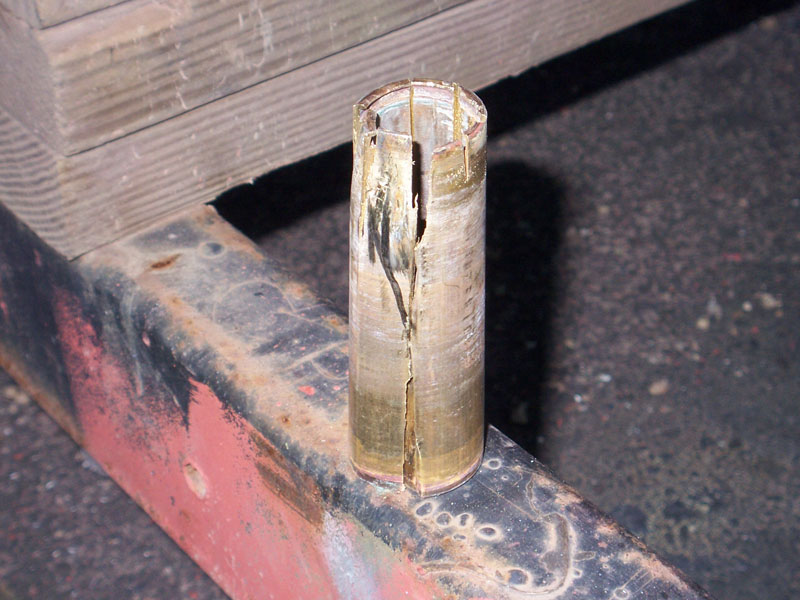 We did a minimal prep job of cleaning the stern tube and moved quickly into ‘put the new Cutless in’ mode. Perhaps that was a mistake. We got the bearing about half way in but it is going to take bigger wrenches, bigger nuts, better swear words and more, thicker threaded rod to get it all the way there. 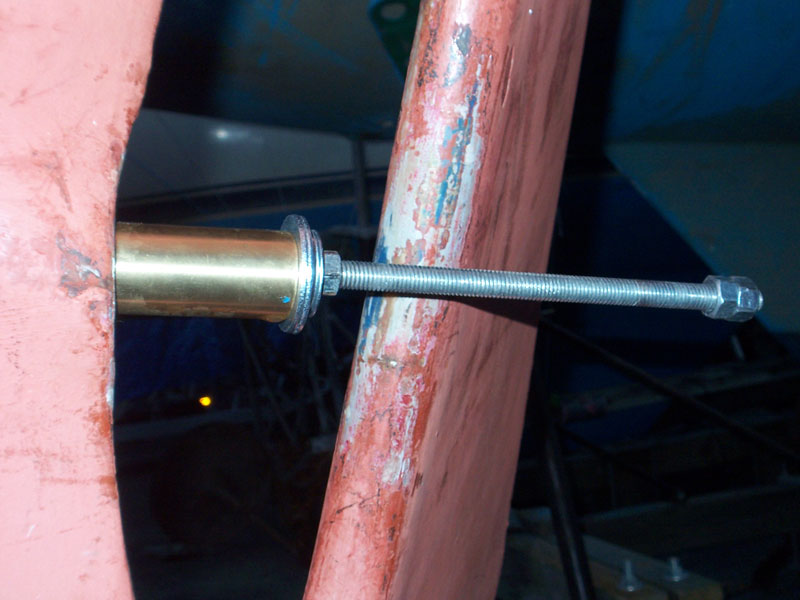 I am not looking forward to pulling the new bearing out and doing a proper prep job of the stern tube. I hope the bigger tools make the rest of this easier.

December 23rd.
With the winter solstice passed and snow and ice on the way, it was time to take another crack at pressing our new cutless bearing all the way into the hull and hopefully setting up a rudimentary tent over the boat.
We were not getting the leverage we needed and we were rounding the outside of the nuts as we tightened them on our last go around. We had some time to think about how to approach this so we bought a new 3/4″ box wrench and some fresh nuts for the threaded rod at the local hardware store. We had been using open wrenches that mostly work on two sides of the nuts which was pretty tough on our nuts. A box wrench grabs all six sides of the hex nut and delivers the power a bit more evenly. The box wrench I bought did not have the ratcheting mechanism shown in this picture: 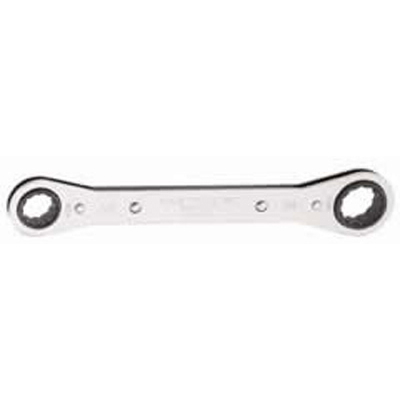 We found a 2′ section of pipe with a 2″ inner diameter that would fit over the wrench that would deliver some extra leverage. We also used some 320 grit sandpaper to lightly reduce the diameter of the remaing portion of the cutless bearing. In addition I put some Marvel Mystery Oil (5W) on both the threaded rod and the bearing. With these extra measures we were able to press the bearing all the way in, if slowly. Hallelujah! Just in time for Christmas, Hannukah and whatever other holidays fall around now.
The press fitting of the bearing took so little time that we were able to erect a rudimentary tent over the deck of the boat to keep the rain, snow and ice mostly off the boat.
The last on-board task I did was to disconnect the two old batteries that will live on the boat for the winter from the electrical system. They should discharge slowly with nothing hooked up to them and we have a way to run the bilge pump if we need to. Our primary pair of batteries are on vacation, sitting in a garage hooked up to a trickle charger.
The next event in the ‘drive train overhaul’ will be driving to the prop shop up in Newburgh, NY. This job needs to be completed well before our April launch date.