Lots of work got us up to this point but we helped put the Odalisque in the water.
We took about an hour to do a quick test sail in light winds once the sails were loaded on properly. She sailed like a dream and that was lovely.
After we left the boat I took this picture of Odalisque sitting on the Hudson River. 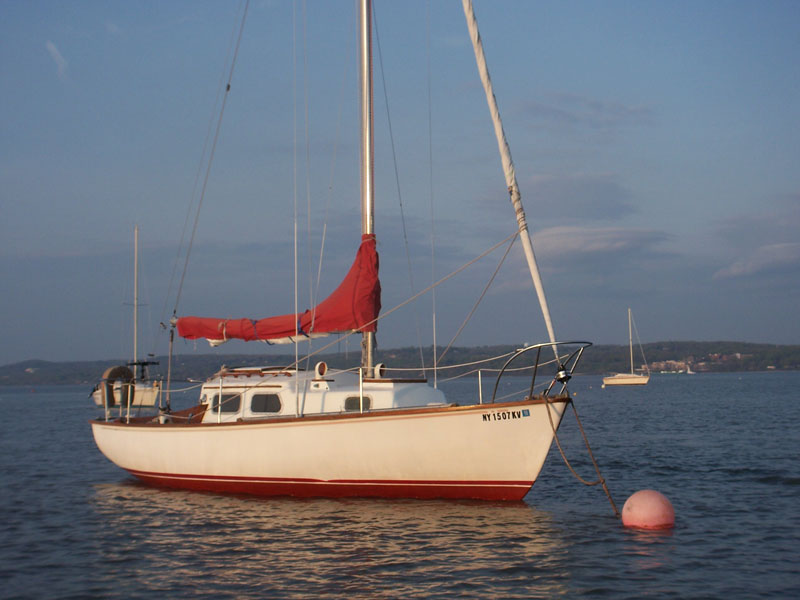 The only problem I found with our new drive shaft was that the stuffing box was getting hot to the touch after just a short while of motoring. This is not supposed to happen.

With a newly replaced stainless steel shaft installed I did not want to screw up something. I replaced the packing about 8 years ago and I could have sworn I used 1/4″ GFO stuffing at the time. I ended up buying 1/4″ packing and it was very difficult to get it into the stuffing nut. I had to ram it in there and could barely get the threads to catch when I threaded it back together.

During our pre-launch activities I discovered several inches of the old packing on the boat in a tool locker that I had used and it was 3/16″. That got my back up a bit. I used the wrong size packing material and it seemed too tight.

With plenty of 3/16″ packing in hand we brought Odalisque in to a finger pier where I could work on the stuffing box repacking and Matt left me to it. I had never repacked the stuffing box with the boat in the water so I wanted to be tied to a dock that was very close to a lift in case something went wrong.

Nothing went wrong but removing the 1/4″ packing material ended up being almost as tedious as it was forcing it in there in the first place. I used a drywall type sheet rock screw that seemed to work better then the dentist’s pick I had nicked. The dentist’s pick is still waiting for me to find it somewhere below the engine. The amount of water coming in once the stuffing box packing nut was free was minimal; perhaps 2 drips a second, certainly not alarming or life threatening. I could have done this work on the mooring but what did I know?

The 3/16″ packing material slipped into the packing nut snug but easily once the 1/4″ material had been removed. The packing nut engaged easily even with 5 rings of packing inside. The wrong size packing, even 1/16″ off can ruin your year so I was glad to have rectified the wrong I had committed against our new stainless steel shaft.

Since we were tied up to the dock I was emboldened to see if I could test our 2 or 3 year old 12 volt bilge pump which was covered in bilge black, oily sludge. The slow drip of the stuffing box was not enough to create enough water in the bilge for the pump to even begin to suck; it had been quite dry. I opened the dummy plug for the knot meter through hull unit we never use to allow a few gallons of river water into the hull and closed it. I watched the now filled bilge as the pump sucked the water out and the level dropped. I checked the over board fitting for the pump but saw no water coming out of the hull. Hmm.

I may need to check the bilge pump hose leading to the over board fitting to make sure it is not blocked up by something. That line does have a “T” to the deck scupper drains so liquid could escape that way as well, but that output fitting is below the water line.

No wonder the ‘honey do’ list never gets any shorter. One thing always leads to another.