2012, October 9th. Overnight on Hudson from across the pond.

My old friend James D. was in NY from London and we had made arrangements to go for a sail and possibly spend the night aboard “Odalisque” on Tuesday, October 9th. We pulled it off in spite of a somewhat chilly forecast of a low near 48F overnight.

Driving up the Palisades Parkway we stopped at the State Line Lookout which commands a majestic view atop 300 foot rock cliffs known as Palisades. 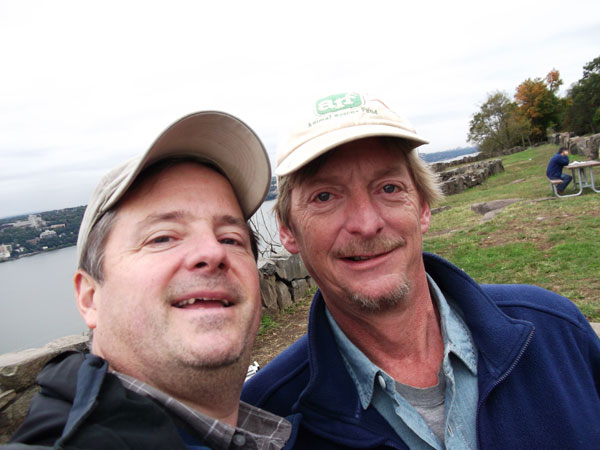 After arriving at Matt’s house we got to see the interactive light sensor panel he was playing with. 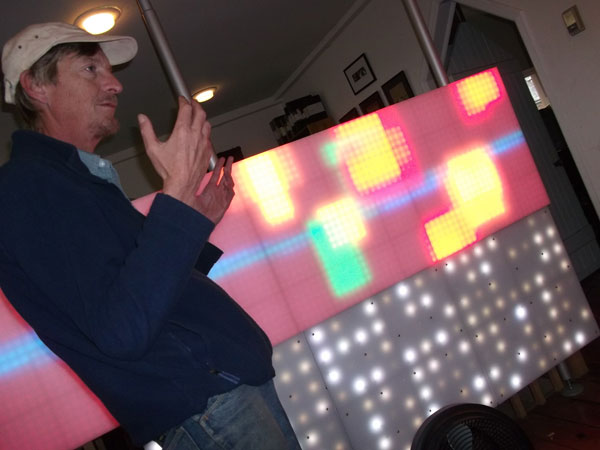 Being the slightly overcautious soul that I am I rigged our main sail with the first reef in it. It was October 9th and definitely felt like autumn with a low gray cloud cover and a hint of chance of mist or rain in the air. 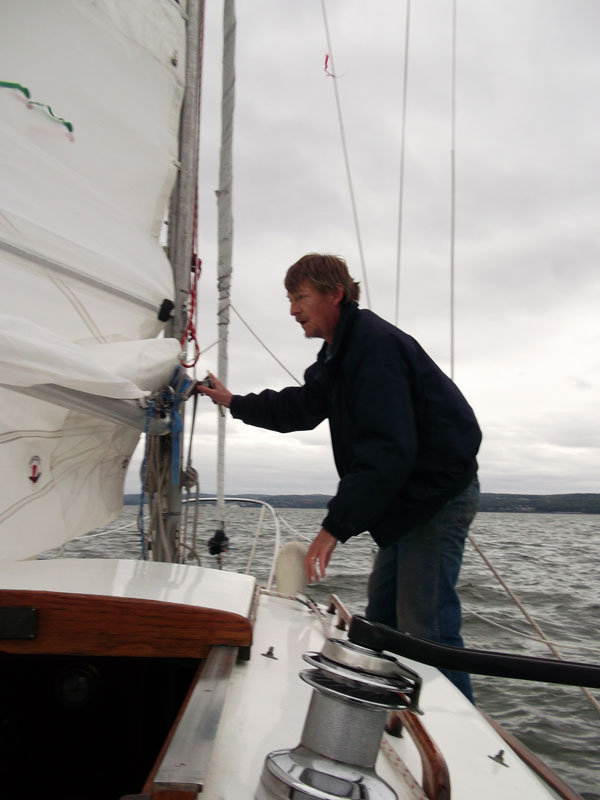 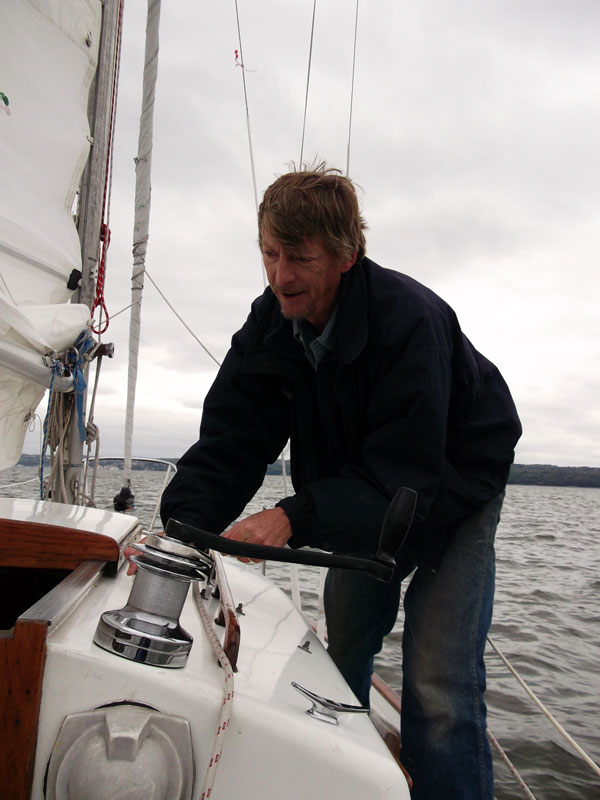 We sailed from the Tappan Zee Bridge up to the rock faces of what is known locally as ‘Hook Mountain’ before returning to the dock to tie up for the night. The reef in the main sail may have been unnecessary but the gusts of the fall season can be much stronger than summer and I did not regret being somewhat cautious. 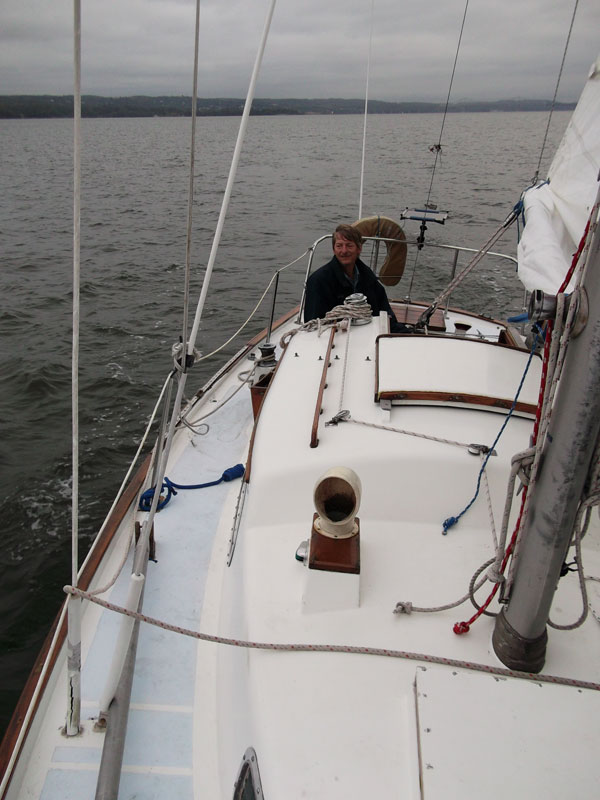 This photo shows that we had a single reef in the main sail and we were near red marker #8. 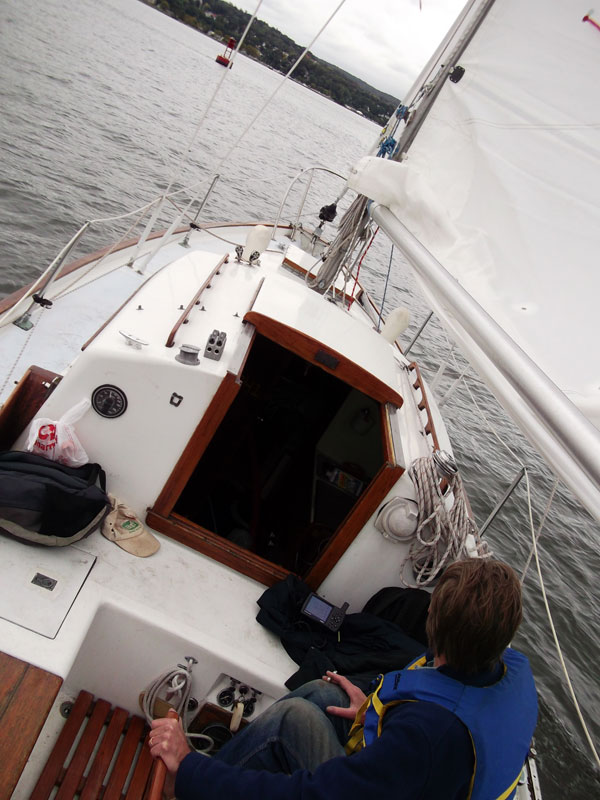 Matt was instrumental and obliging and helped us get out to “Odalisque” since the launch was not in operation. He even provided a loaner sleeping bag for my mate Jim that made it possible for both of us to spend the night on the boat tied up to the dock. 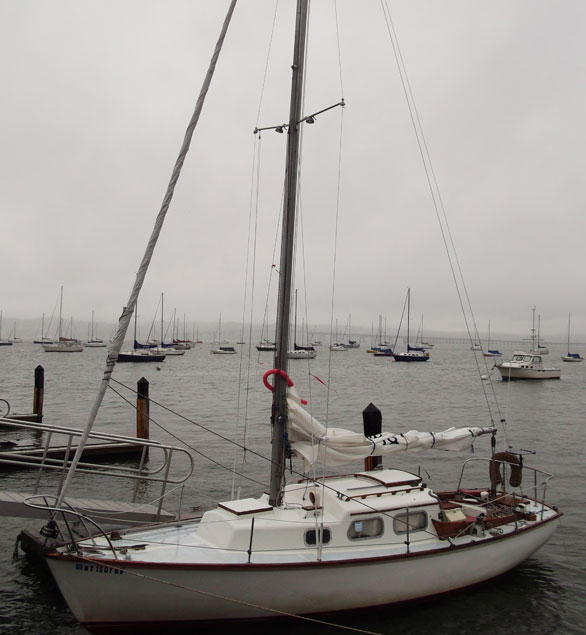 Note the swimming noodle used to silence the halyards on the mast. This made sleeping in the cabin much more quiet.

Once we were tied up I attempted to get our alcohol fueled old stove to start to heat up some Chili con carne I made the day before. The pump on the stove would not hold pressure so I thought of the propane plumbers torch I had in my car. We brought it down to the boat and used it to heat up the Chili and had a warm meal, sans cheese or corn chips. The Chili was good and we both soon began to fade after eating and our next beverage. 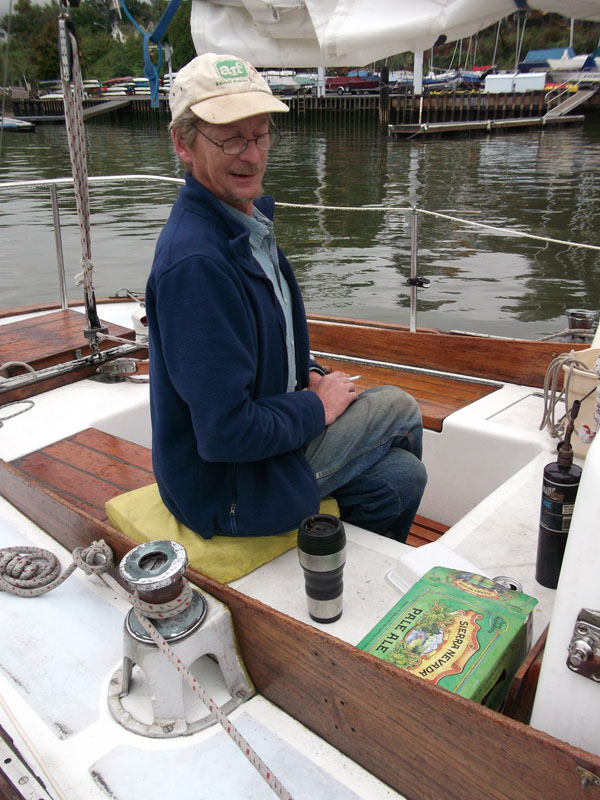 Note the propane torch on the bridge deck which was used to heat up our dinner.

I waited up a while longer than Jim but finally went below to enjoy the balmy temperature of the cabin. The forecast was for a low of 48F but the river still felt about 68F so our ambient air temperature was more like 58F on what could have been a cold night. I never put on the pair of long John underwear I had brought along in case I got cold.

The next morning Jim woke up earlier than I did and made his way into town to pick us up breakfast sandwiches; a welcome treat that I may have been dreaming of in my semiconscious state. We took our time but re-flaked the main sail and got the boat ready to be taken back to her mooring on the river. I called Matt who graciously allowed that he would pick us up with a club motor boat in a half hour. Not long after we had tied “Odalisque” back to her mooring then I heard the sound of a small motor and saw Matt coming out to get us. He might have arrived 5 minutes later to find us ready to go but we quickly finished our boat shut down chores and all headed back for dry land. Matt was more than patient and waited for us to get our act together and that was just the icing on the cake of a great overnight on our boat with old friends.

Even if it was not a long sail, it was quite memorable. Days and nights spent like this remind me of why I like to own a boat and spend all the money and time on it that I seem to.

Jim took this photo of the rocking chairs on the upper porch of the clubhouse. 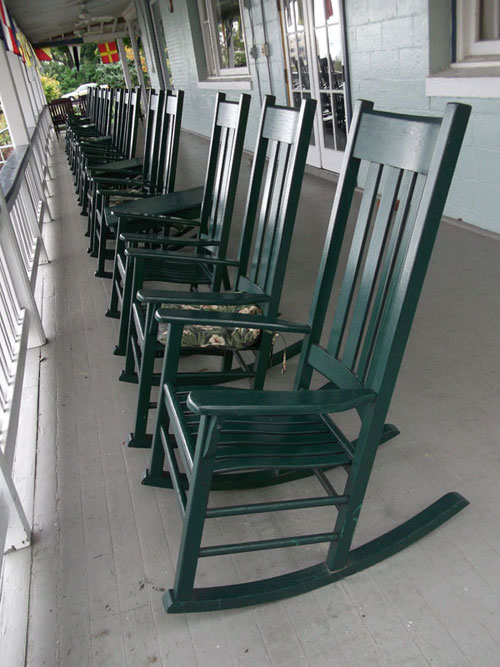 This image is a bit bitter sweet as the roof that covered this porch was ripped off in the howling winds of hurricane Sandy which visited us at the end of October, a few weeks from when we were there. In fact much of the waterfront area of the club looked quite different from this wide angle shot Jim took on October 9th, 2013.

My next post deals more with the impacts of hurricane Sandy.

One Response to 2012, October 9th. Overnight on Hudson from across the pond.