While the computer models diverged a bit about Sandy’s predicted path early on it became quite clear to me that we would bear the brunt of some of the fury. I forget which day I went up to Nyack before the storm hit but it was a few days prior to any expected impact.
We stripped the sails off and removed the boom, added a set of longer pennants to our mooring for a total of 4, with chafing gear and ran lines from the anchor cleat back around the mast and cockpit winches and such. I removed and inserted the plugs for our forward cowl vents to close them for the impending expected weather. The solar panel was also stashed below as was any extra removable windage. The forward hatch was secured with a plastic wire tie and all thru hulls were closed. We did what we could and noticed many other boat owners preparing their boats for what might come. What would come we knew not.

Once the computer storm path ‘spaghetti’ models started to converge on a landfall around Seaside Heights, NJ, and the storm agreed I knew that we would be on the wrong quadrant of the storm. The north east corner of any tropical cyclone is the most dangerous in part because of the mass of water it pushes before it that can cause storm surges and higher wind speeds. NOAA began predicting fairly alarming storm surge heights for our area as Sandy approached.

As Sandy closed in I was monitoring the high and low tides at The Battery (southernmost Manhattan) and Sandy Hook, NJ on a NOAA website.

The peak flood hit us in NY City around 7 pm local time so there was no light to take any decently shocking pictures. We lost power about the same time as “the surge”. Once the lights went out I noticed what might have been lightning but was most likely transformers in the electrical grid giving up the ghost with spectacular explosions. I am just happy that Sandy was not slower moving and did not bring us yet one more peak flood tide.

This photo was taken before the flood, looking west at the Hudson River only 2 blocks away from the corner of our building. The stop sign and white pedestrian lines in the foreground were just under water at the height of the deluge. 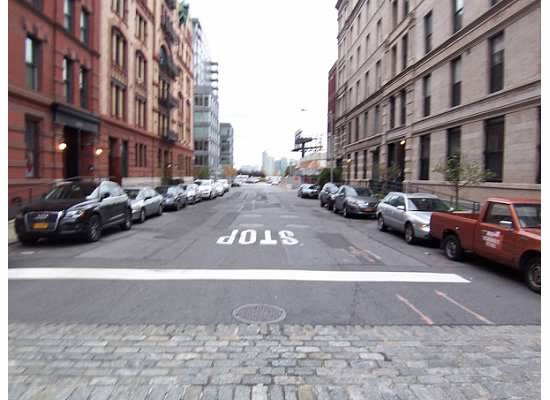 The afternoon before the really high tide I took a walk down to the Hudson River Park to check on the river’s height. It was closer to low tide but the water level was already up to the walkway in the park. 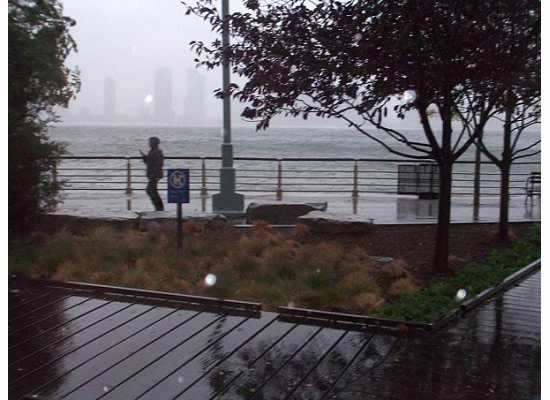 I had been monitoring the weather as long as we had power and internet, I had seen how high the storm surge was and I listened to the damage reports come in on my battery powered radio on WNYC so I had largely resigned myself to the fact that “Odalisque” was likely a casualty of the storm herself. Cell phone service was largely wiped out where we live so I had to learn how to send text messages instead as they would go through but voice calls would not. The day after the storm I found out that “Odalisque” had survived from a text message I received from Matt.

We lost power for 5 days in Tribeca, lower Manhattan, which seemed to be the average for those who were mildly affected by the storm. First hand reports from Sea Cliff, on the north shore of Long Island and Nyack in Rockland county revealed that many homes in these suburban areas lost power for about the same amount of time. We were quite lucky compared to those who lived in other low lying coastal areas. Living without power for those 5 days highlighted how dependent I have become to having the internet and even electric lighting.

On my first visit to Nyack post-Sandy I was impressed with the damage that had been inflicted on NBC. I was also saddened by the number of moored boats that had broken loose (20+), many of them totaled and one completely disappeared. It will take quite a bit of work for NBC to get back to the state it was in before Sandy.

As it turned out our haul out was delayed a week by the effects of Sandy but “Odalisque” is now high and dry on the hard, sitting comfortably in her own cradle, ready or not for the winter to come.