How had I come to be a one third owner in this boat in the first place? I had resisted buying a keel boat because I had an idea how much just the yard fees would be for a boat like this. I had also resisted buying a bigger boat as I had an idea how much work a larger vessel would require, having owned a smaller sailboat or two. I was talked into being a partner in this boat by my partners, Matt and Noah. I had no idea how this odd triumvirate of owners would work out either but I opened the door and stepped into the darkness hoping that my feet would find the ground.

It had been a wet and stormy spring in New York that year so I anticipated the worst for our delivery trip from East Hampton, NY to Glen Cove in our new to us old sailboat. I met with the previous owner (PO), Shawn Murphy, who kindly spent a full day going over the boat with me. His family had owned T27 #328 for nearly 20 years so he knew her intimately and he shared his knowledge with me freely even though I could only absorb so much. I had never owned a boat with a motor or VHF radio before and there was a lot I needed to learn and quickly.

Our plan was to take ‘Odalisque’ back to the western Long Island Sound (LIS) to Steppingstone Marina near King’s Point where Noah had arranged a cheap mooring for us. I stayed with my sweet sister Sara in East Hampton and waited for Matt and my old friend Donald Mullen to arrive so we could begin our delivery trip. I had provisioned the boat thinking it was going to be a cold, wet, windy and miserable trip, and that we would need lots of quick, easy carbohydrates to keep warm. 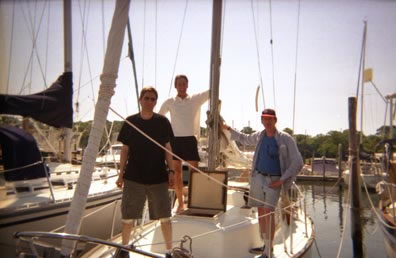 The weekend we left Three Mile Harbor was the weekend that summer finally showed up in the northeast and it was sunny, warm and mild with very little wind. In many ways I was relieved that the weather had broken out of its stormy wet cycle but the lack of wind meant that we would be depending on the old Atomic 4 gas engine for much of our progress. I remember Donald and Matt tinkering with our new toy, a Garmin GPS 76 while I motored us out into Gardiners Bay. I had to cajole these two into hoisting some sail and leave the GPS alone for a moment so we could catch some of the light but favorable wind as we headed towards Plum Gut. 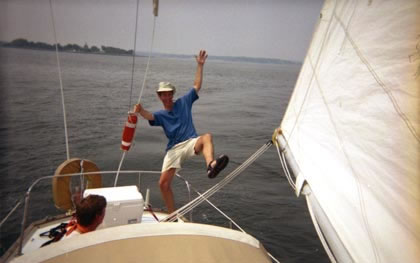 I had sailed in Gardiners Bay before but in my little 14′ Viking day sailor that Donald had given to me. This was an entirely different experience. We were not planning to head back to the launching ramp where we came from, we would be connecting the dots of my limited sailing experiences in Gardiners Bay and Hempstead Harbor. Of course we probably would have headed back to Three Mile Harbor if the engine had quit or the weather turned nasty but we got lucky.

I had read some stories about rough water in Plum Gut in some conditions but we got lucky there too. We had also been trying to time the currents using the Eldridge Tide and Pilot manual. We got Plum Gut right and had no issues there but once in the Sound the ebb current was pushing us northeast and we wanted to go southwest and the forecast 5 – 10 knots of wind was more like 3 knots so we motored, and motored, and motored some more. The end of this ‘sailing’ day found us entering Mattituck Creek where we tied up for free at the town dock at the end of the creek.

Instead of eating the food I had provisioned for us we walked into the town and found a restaurant. Mattituck was a cute town with many gingerbread Victorian houses, much like Sea Cliff where I spent most of my youth. We spent a mostly quiet night at the town dock which was located next to the town launching ramp where the EMT or Sea Tow people seemed to launch or haul boat after boat. We refueled early the next morning while I slept as the engine purred in its compartment next to my berth.

When I did get up we were back out on the Sound motoring in much the same conditions as the day before. We arrived at Port Jefferson and ducked in to take on more fuel and ice. Mr. Murphy the PO had warned me not to let the gas tank level get too low saying it was not like a car you could run down to empty and just refill. I should have known there might be more to this explanation. We have since discovered that the pick up tube in our gas tank leaves nearly a half tank of reserve fuel that cannot be used. Just another thing to fix.

We motored all the way to Huntington Bay and arranged for a transient mooring in Huntington Harbor. We should have stayed on the boat and eaten some of the food I had provisioned but we stayed on shore at my other sister’s house instead.

Getting a late start the next morning we began motoring up the Sound again. In the afternoon the wind picked up enough for us to finally douse the engine and sail most of the way to Hempstead Harbor where we caught the best wind of the entire trip; gusts around 15 knots were driving ‘Odalisque’ through the water with a bone in her teeth. Finally a chance to see how our new gal behaved when operating as a proper sailboat. We had reached our destination of this leg and ‘Odalisque’ spent a week on a transient mooring at the Hempstead Harbor Club.

I believe it was the following Sunday that Noah was able to get some free time away from his growing family (he and Beth now have 5 boys) and he and I planned to take ‘Odalisque’ around from Hempstead Harbor to Steppingstone, her new home to be. The wind was light but we made it around to the extreme western Sound and enjoyed a few tacks through waters that were unknown to me. Noah had asked me if we should not lower the center board and while I knew he was probably right I nixed the idea as our boat has a nearly full keel anyway. We were sailing between the Steppingstone Lighthouse and King’s Point Academy when we heard an air horn being blown at us from shore in our direction. I was mildly annoyed but later figured out why we were being ‘horned’. We had been sailing right over the rocks that are the Steppingstones that are clearly marked on the chart. It was a good thing that we did not have the center board deployed and that the tide was high. Dumb luck saved our asses this day.